One of the most important sources of energy in the world is the sun. Not only is solar power sustainable in that it produces no greenhouse gases and no harmful byproducts, but it is also a limitless source of energy.

While solar technology has taken a while to catch up with the power demands of daily living, having solar panels is a great way to save money as well as the planet.

But exactly how do solar panels work to produce electricity? In this guide, we are going to talk about the science behind these devices and how they produce sustainable and clean energy for whatever purpose.

How Do Solar Panels Work?

Solar panels harness the power of the sun to produce electricity. Here is a step-by-step guide on exactly how solar panels capture and convert energy:

1. It begins with the panels

A solar panel is constructed with a layer of silicon cells (called photovoltaic cells) on a metal frame protected by a glass casing. Each solar cell contains a thin semiconductor wafer made from two layers of silicon. One layer is positively charged, and the other is negatively charged. This produces an electric field. These cells are surrounded by a special film and wiring to make sure the electricity flows smoothly through the panel

More often than not, multiple panels are grouped into what are called solar arrays to maximize their power output.

2. The sun activates the cells

When the sun hits the solar cells, the heat and light from the sun energizes each cell and causes electrons to come loose. The electrical field in the semiconductor wafer forces these electrons to move in a specific direction, thereby creating an electrical current throughout the system.

3. The electrical energy is converted

Each panel produces a direct current (DC) of electricity, which is not the type that usually powers your appliances and devices. As such, the electricity produced by a solar panel must be pushed into an inverter, which can convert it to an alternating current (AC).

Modern solar arrays can have a single inverter per panel or one inverter for the whole array. As inverters convert to the same specifications as your power company, there is nothing else you need to change. Your array can be expected to provide power to your home.

4. The Net Meter tracks your usage

At night and on cloudy days, your solar arrays might not produce enough to fully power your home. Also, excess power produced during especially sunny days might go to waste. As such, homes with solar arrays benefit from having a meter for each direction your power goes. This is a process known as net metering.

One meter measures the power going in from the electrical company, and another meter measures the power you put back into the grid from your solar panels. This answers an additional question–How do solar panels work with the grid? This system measures your surplus energy, which can reduce your power costs and maybe even earn you some money, depending on how much surplus energy your arrays produce. 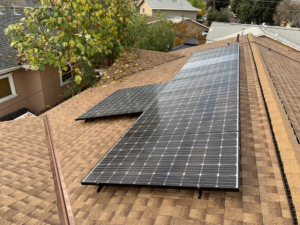 As many fuel and power sources prove unsustainable for human use over time, it is important to consider solar energy as an option for your home or business. It greatly reduces your power costs in the long run and also shrinks your carbon footprint, leaving you with both a thicker wallet and a lighter conscience.

While you can now answer, “How do solar panels work?” your next question should be, “Is solar right for your home or business?”

If you’re looking for a company to supply and build your solar panel array in the Bay Area, look no further than Simmitri. We have over 25 years of experience making homes smarter and more energy-efficient. Get in touch with us today.

Since 1995, Simmitri has demonstrated to thousands of satisfied customers, expertise in designing and installing Energy & Roof systems.

This website uses cookies to improve your experience while you navigate through the website. Out of these cookies, the cookies that are categorized as necessary are stored on your browser as they are essential for the working of basic functionalities of the website. We also use third-party cookies that help us analyze and understand how you use this website. These cookies will be stored in your browser only with your consent. You also have the option to opt-out of these cookies. But opting out of some of these cookies may have an effect on your browsing experience.
Necessary Always Enabled
Necessary cookies are absolutely essential for the website to function properly. This category only includes cookies that ensures basic functionalities and security features of the website. These cookies do not store any personal information.
Non-necessary
Any cookies that may not be particularly necessary for the website to function and is used specifically to collect user personal data via analytics, ads, other embedded contents are termed as non-necessary cookies. It is mandatory to procure user consent prior to running these cookies on your website.
SAVE & ACCEPT